A Wedding Story: From Australia With Love 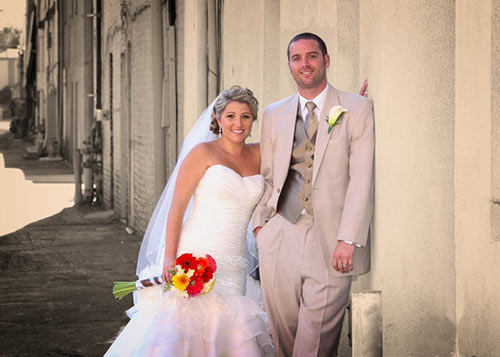 Having been in the wedding business for over thirty years I do have a wedding story or two to tell so I thought I would start a series devoted to those stories. Now, I could tell some very embarrassing stories, couples who broke up before I could deliver the photos, couples who never picked up their album, but those stories I won’t tell. The stories that would embarrass the participants (unless that person was me) I’ll keep to myself. Hay, one of those stories could have been or will be from your wedding.

This months post is actually a series of stories involving three weddings that all have Australia at its center.

She found her husband on a million acres

The first wedding story is one about a bride who spent her childhood here in the central valley. She moved to Australia in her early teens with her family. In Australia their ranch was just a tad larger then there’s was here in California. A million acres large, I kid you not, a million acres. Now apparently in that part of Australia that was not so uncommon. On that million acres, they were growing wheat that they pelletized and shipped to England to be used as cattle feed. The couple came back to Visalia for the wedding and I was lucky enough to be their photographer.

We all know that in Australia the language is English, but Australian English is a bit different than American English. Here in the states, we use the word awesome to describe something that is really good, in Australia that could be described as “a Bloody Ripper”. In Australia, if someone is not too smart they say they are “a few stubbies short of a six-pack” (a stubbie is a small bottle of beer) and if you’re an electrician in Australia there called a “Sparkie”.

So I am in a room with the guys as they are getting ready for the wedding, putting their tuxes on, etc and I knew they were speaking English words, but I didn’t understand much of what they said. I just smiled, looked through my camera and snapped a few photos. Later in the day the groom came up to me and asked if I understood what they were talking about. “maybe about 20% of it” I replied. He laughed, “that’s what I thought by the look on your face”.

In this wedding story the bride missed one summer

Another Australian wedding story was one where the bride had met her husband through the internet. They worked for the same company and conversed through their job. He lived in Australia and she lived here in Visalia. (and I thought my wife and I had a long-distance romance, I lived in Farmersville and her in Fresno) They had their wedding here in Visalia in May and moved to Australia after returning from their honeymoon. I remember thinking about how she would miss all of one summer as Australia was coming into their fall season and soon it would be winter.

The final wedding story is one about a bride who went to Australia just to have a change in her life. (Hay, now mate, that is a big change) Getting married was the last thing that was on her mind. She was just about finished with a years teaching assignment when she met a guy and the relationship became more than just casual. Well, that guy became her husband and they came back to Visalia to get married. The most memorable part of that wedding was when the guy that had introduced them to each other got up and told the story: his introduction went like this: Ben, this is Sheila, your future wife, Sheila this is Ben, your future Husband. What a way to get introduced. But it came true.

Oh, and from all this, I learned that Fosters is NOT Australian for GOOD beer. That is is a cheap bear. More like Lucky or PBR is here. (hay, nothing wrong with Lucky or PBR, I drink PBR)

Look for next months wedding story: The dynamite box and the lost wedding ring.

Check out our wedding packages and prices page