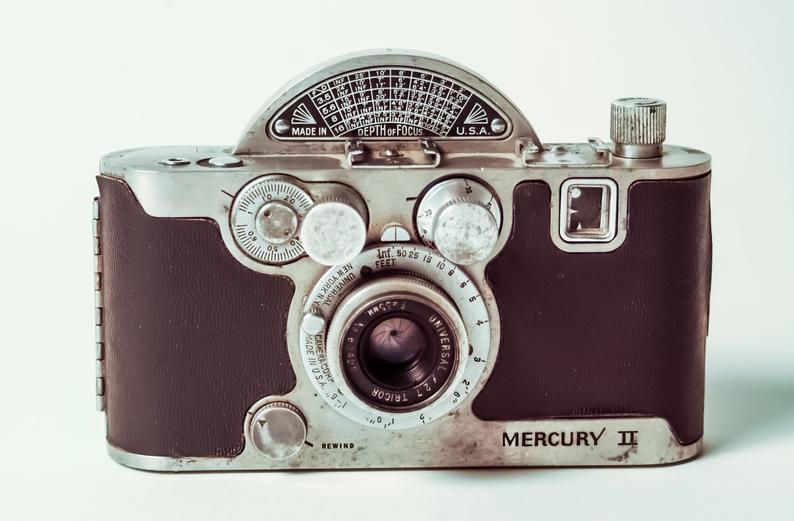 Man, this camera sure does show my age. Well, in reality, it is a bit older then I am. I bought this camera in a pawn shop in Fontana, California, in about 1968,  but it’s much older than that. The Mercury II camera was built by the Universal Camera Corporation of Chicago, IL, in 1945.  I can’t remember how much I paid for that camera, but it couldn’t have been much more than $20.

Half frame cameras were popular throughout the film era because the negative was half the size of a regular 35mm negative. You get twice as many photos as you did from a regular full-frame camera: 72 pictures from a 36 exposure roll of film.

The Mercury was a rough camera in that it was not the best camera when new and my example was far from new. I remember it had a film advance problem; it would not fully wind the film to the next frame every time.  This would cause overlapping frames and result in two ruined photos on occasions.

The Mercury II had no light meter.

Lacking a built-in light meter, you would need to use a handheld one to get your exposure. If you didn’t have a light meter, you could refer to the side of film boxes that had little drawings that would show a sunny day, a cloudy day, shade, etc. Hard to imagine today when your phone has a totally automatic exposure system built-in and you don’t even need to think about any of that. Even as I write this, it sounds like a real junker, but for me, at the time, it was my first 35mm camera. I could only go uphill from there.

That half circle on the top of the camera was actually the enclosure for the circular shutter. Most 35mm cameras had what was called a focal plane shutter, the shutter was cloth and move from one side of the camera to the other creating an opening that would allow the film to be exposed as that opening would move across the film. The Mercury rotated in a circle, and the opening would move across the film as it rotated.

I used this camera for about a year or two before I got my first 35mm SLR.

Check out more on the Mercury here.