Kings Canyon Wedding; The Story Behind The Photo 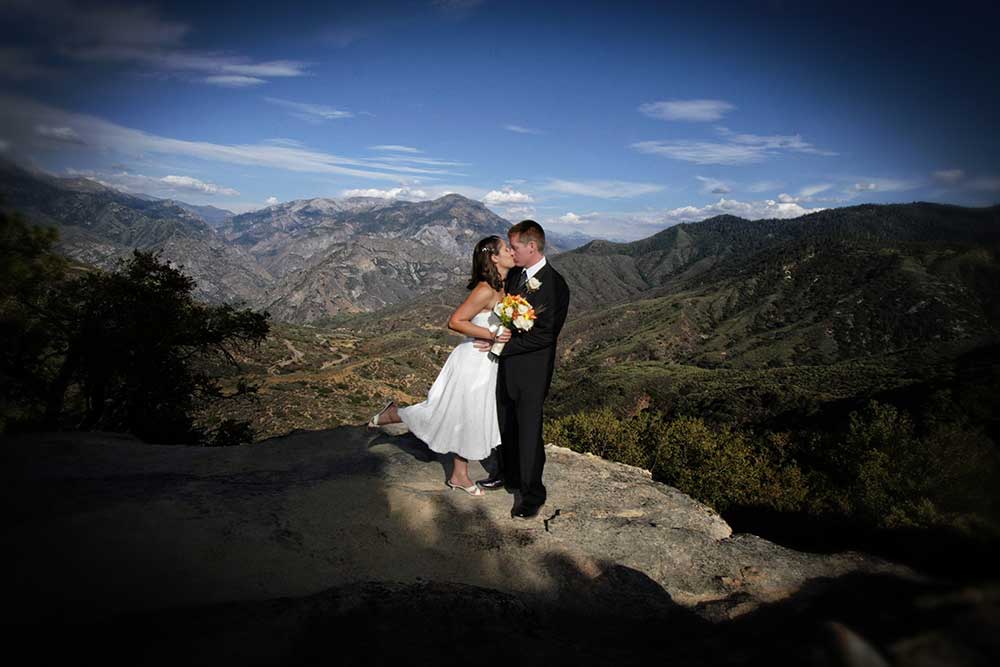 Doug and Heather were from Iowa, and they wanted to get married somewhere different. They searched the internet and found Zumwalt meadows in Kings Canyon National Park. It fit the bill perfectly when it came to what they were looking for in a place for a memorable ceremony. Less crowded than the more popular Yosemite, just as beautiful and when your from Iowa, about as different from the flat prairie lands of their home state as you can get. They decided that they would come to California with their parents and two best friends, get married, then go back home to have a reception with over 200 guests.

They found wedding information on our website that just fit their needs and booked me over the phone. We met the day before the wedding and did some planning, but a photo like this is not easy to plan. It relies on many things coming together.

On the drive down into the canyon, I saw this view.

With a rock to have the couple stand on and that view spreading out behind them, I knew that we needed to take their photo at that spot.

After the small wedding ceremony was over, we drove around the valley, taking photos, then I told them about the overlook. It was about a forty-five-minute drive back up the hill, almost to the turnoff to Hume lake. but what turned out was one of the most iconic images I have ever captured.

The lighting was perfect, a few minutes later and we would have lost that sunlight on the couple and the rock. The day was clear, with just a few clouds to fill the sky and give it some depth and interest, and the air was clear and free of dust or smoke from any fires. I could not have ordered a better day. It was good, I had them kiss and then Heather kicked her right leg up, dam, perfection. It just added that little extra feeling to the photo. The excitement of being just married.

One other little ironic twist.

The couple was from a small town of about 15,000 people called Indianola.  If you are driving on high 180 east from Fresno, into Kings Canyon, you’ll pass Indianola Ave, running north-south near Sanger. Each time I drive that road, I think of the couple from Iowa and the moment when it all came together to make a memorable image, for me, and for them.