It doesn’t seem possible, but it’s been 20 years since I started www.roydresselphoto.com back in the last few days of 1999. It also doesn’t seem possible that at one time, I didn’t have a website. I can’t imagine not having one today. A lot has changed since that day when I went live with what by today’s standards was a very crude site.

It was the new millennium

It was, after all, the start of the new millennium. Lots of people wanted to get married on the last day of 1999, or the first day of 2000. To have their photos posted on the web was a new, cool thing to do. I wanted the business to get talked about, and Weddings on the Web was one way to do that.

I have always been a person who wants to do things myself. Technology and computers were something that also interested me. I bought my first Windows (3.1) computer in March of 1993. Used it for word processing, email, and bookkeeping plus a great contact and calendar program called Sidekick. I can remember being able to have all these letters that I could send to customers already set up, with correct spelling (most of the time) and grammar, and all I needed to do was add their names and send the letter to the customer. Wow. I didn’t have to write the entire letter each time I needed to send one out, now that was exciting.  Now, sending letters in the mail seams so much work.

By the end of the 90s, digital photography was coming into the consumer market. I was ready to dip my hand in the new waters that would be the future of this medium. My first digital camera, which I bought in December of 1999,  was an Olympus C2020 two-megapixel camera for a whopping $750. Now, with a digital camera, I could take and post photos to my new website. Woo, cool.

Looking at the variety of software to build websites at the time, I decided I wanted something that would be easy. Something that didn’t require coding or a lot of time to learn. It had to be simple; I was, after all, a photographer first. I settled on Microsoft FrontPage software. It was a visual builder making web page design easier than using code. I ended up using it, and it’s successor, Expression Web until 2013 when I began using WordPress to build my site.

Weddings on the Web became a hit that lasted for over fifteen years.

When roydresselphoto.com went live, and I began posting wedding photos to it after each wedding, it became a hit. I even had people contacting me if I didn’t have a wedding for a few weeks. They wanted to see the dresses, the people, and the decorations that make up a wedding.

I was also able to post samples of all my work, prices, and what I offered. It became a brochure. Previously, I would have to mail people prices or go over the details over the phone. Now people could look them up on the site. This was in the early days when search engines like Yahoo and Alta Vista and google in its infancy, were being spammed by people who would put keywords all over a page or hide them using the same color as the page background. So I would still need to give people the web page address all the time, or they would ask what your web site address is. Now, I just tell them to google Roy Dressel.

Running into issues with a local hosting provider

Originally I had wanted to use the site name (URL) of www.roydresselphotography.com. But because there was a limitation on how many letters could be used in the URL, I settled for www.roydresselphoto.com. I used a local company to host my site called Mindinfo, and they registered my domain name for me. I learned a big lesson in what not to do when I let them do that. They were soon out of business, and I was forced to move my site to a new hosting provider. To do that, I had to show that I owned the domain name. Well, Mindinfo had registered the site, and they were the owner of the domain name. Now they were gone. I had to go through a process where the new host contacted Mindinfo. When they got no response after a few days, they reassigned the domain to me. A real pain.

The site has had many changes in the twenty years

It used to be that roydresselphoto.com was both online and on one of my computers, and I just uploaded a page or a photo. I ran it on my home computer, making it easier for me to post those wedding photos the day after the wedding because I had to be at “that” computer when I wanted to change anything. That way, I didn’t have to go into the office. Today, I use a piece of software called WordPress running a theme called Divi from a company called Elegant Themes.  for the website. It’s all in the cloud, so no matter where I am, I can access the site and make changes.

Over the years, I went through several domain hosts. After the MindInfo Issues, I moved the site to a large hosting provider called Hostway. After a few years, I found a better deal with the provider 1&1 Ionis, and just recently I moved all my sites (I have three websites) to one of the premier hosts called Siteground. Costs have gone way down in hosting. At one time, I was paying $50 a month for basic hosting with just a small amount of webspace. Today it’s about about about $7 per month with gigs of space.

Of course, today, the web is just part of our lives. It went from a fun thing to use to something that is required to do business. Like electricity, if the internet goes out at work, I can’t do much at all. Most of the apps that I use are in the cloud. My bookkeeping, my contact info CRM, my phone, is dependent on internet access.

WordPress runs 35% of the web

WordPress, the software that runs my website runs 35% of the entire internet. It’s called open-source software. It’s is free to use and is what is called a content management system or CMS. When you view a page on a website that is run by WordPress, that page doesn’t exist anywhere except on your screen. The elements get pulled into what you see on the screen by the use of a database. So the photos come from one place, one paragraph from another, one headline from still another, and it all comes together to show you what you see on the screen.

In looking at a site called “The Wayback Machine“, you can see samples of websites in the past. In checking it our I was able to take a little journey into the past with the website. Here are some examples. 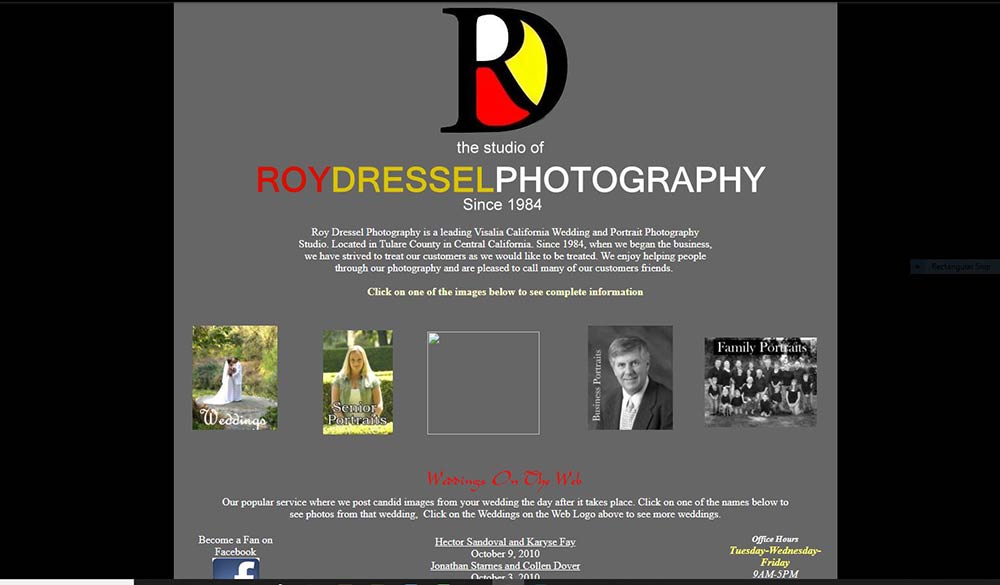 And from 2010, that new logo that lasted for about eight years. Now I am back to the old stand by.

Thanks to the internet archive, also know was the Wayback Machine. It keeps copies of websites going back to the late 90s. fun to take a look at sites from years ago.